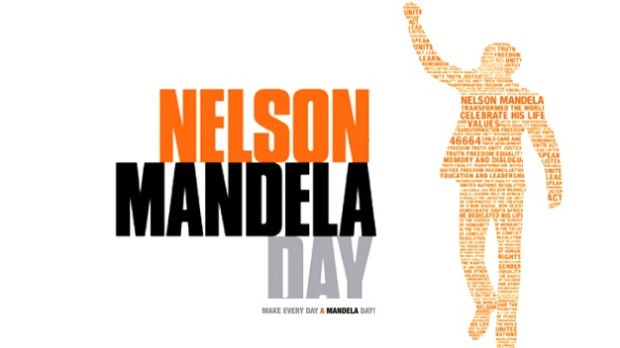 Today is Mandela Day, a day which marks the birthday of Nelson Mandela (his 94th!), affectionately known as Madiba, the former president of South Africa and one of the most celebrated world leaders today. It is also a day where the people of South Africa and around the world are encouraged to take 67 minutes of their time to give back. The number 67 is representative of the number of years he spent fighting for human rights. Already you may be thinking in your mind that this is something that people should be doing every day, but I think the importance of Mandela Day is to be a celebration, a day of of learning and of gratitude and really, of selflessness.

Individuals like Mahatma Gandhi (whose movement of satyagraha, or non-violence has a place in South African history; he studied to be a lawyer in Cape Town), Martin Luther King Jr. and Nelson Mandela, their values and beliefs have played a huge role in my life. I am lucky to have such a neat family history, one in which stories have been weaved through history to create such an exciting legacy for myself and my cousins. With both sets of grandparents from India, who then moved to South Africa where my parents were born and raised (they lived under the rule of apartheid until the 1980s) to moving to Canada where my brother and I were born, it’s certainly been an incredible journey, one full of hardships and obstacles, but those which have been overcome. My grandparents and parents made it possible for me and my brother to be here.

My grandfather, Vasudev Jeewa Juta, is an incredible human being. There is so much I can say about him because he is one of the most thoughtful, kindhearted, inspiring and wisest people I have ever met. Friends of mine who have met him will surely say the same, as he makes quite a first impression. During his time in Verulam, Durban, he always had an interest in making a difference, helping others and giving back. While he found himself in a number of professions, I have always been taken with his passion for education; as a teacher, he recognized the abilities of his students and sought to educate them in a way where they could reach their highest potential. This was a job that he thoroughly enjoyed and it became more than a job for him. Everything he did was out of the goodness of his heart. He strived to learn more and in turn, encourage those around him to open their minds and take in as much knowledge as they could, especially through reading books. He was also very involved in advocacy, fighting for equal rights during the apartheid movement and was blacklisted for these very efforts in the 1980s, leading him to make the journey to Canada with my grandma and dad. He accomplished many things which broke barriers and led the way for other Jutas to follow their dreams.

My grandpa, my brother Deven, me and my grandma

These same traits were passed down to my father–who like my grandfather, had many stories to share and was a teacher in his own right, always wanting to learn new things, helping me with school projects and essays and showing me the power of learning of education–and in turn, to my brother and I. My mum also shares these values and taught my brother and I to be aware of those less fortunate in the world, something which has stayed with us. Both lived under the rule of apartheid and experienced what it was like. It has always been interesting hearing their stories, from not being allowed to go to certain places, being required to carry a pass book and also looking back on it, having left in the middle of the apartheid era. At the time, Indians were grouped together with Bantu Africans, in some cases, and faced similar inequalities.

For a while, I’d had an interest in being a teacher, but chose not to pursue that path due to personal views. However, Mandela’s values and beliefs have followed me in my volunteer experiences, both locally and globally and made me as passionate as I am about education and helping others. From working with newly arrived immigrants as an ESL tutor here in Hamilton to my internships in South Africa and Tanzania (check out the Around The World with Avi page for more) where the majority of my work dealt with teaching and promoting equality and quality in education, it’s amazing how it’s the little things that matter and also the power of education to make a change. It’s also not just about the ability to teach, but to be taught, just like how it’s not just about making a change, but being the change.

“I want to shine.” With Grade 2 and 3 learners at The Shine Centre, one of the NGOs I worked with in Cape Town

One of the things on my to-do list in Cape Town was to visit Robben Island. I’d written papers for a Human Rights class dealing with the history of South Africa at McMaster and knew I had to visit, considering how much I’d read and heard about Mandela’s time there. It’s just one of those must see places. The thought of even going to the very place where Mandela was imprisoned, far off the shores of the city of Cape Town, also struck my curiousity. On the island, we were given a bus tour and also a walking tour in the prison itself, where we got to see Mandela’s prison cell as well as the garden he and his fellow prisoners cared for. 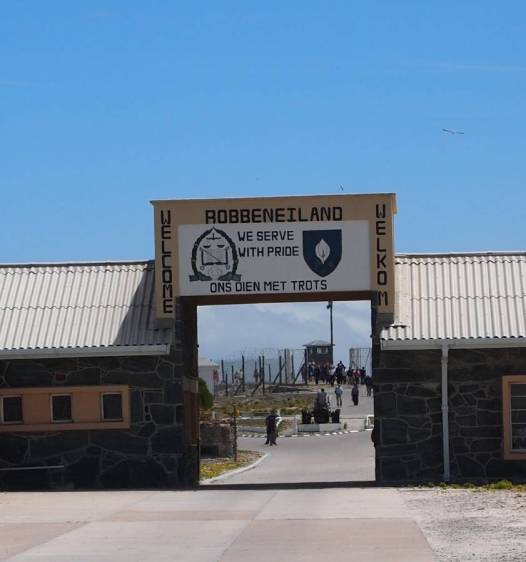 “We serve with pride.” The gates to Robben Island.

As my friends and I were waiting for the next ferry, I found myself gazing out at the water, looking at the city in the distance and really getting a sense of what it must have been like on the island for the prisoners, to be so far away from the mainland. Staring out at from the island, watching the waves crash along the shore and looking at the clouds hanging about Table Mountain and the city below, gave me goosebumps. It was then that I really appreciated what Nelson Mandela had done for his people and his country and how inspiring his selflessness was.

The view of the mainland from the island

So no matter where you are, wherever you go, whatever you do, keep in mind how powerful something like education can be. Aspire to teach and in turn, learn from others and you’ll realize that education really is the most powerful weapon which you can use to change the world.

4 thoughts on ““Education is the most powerful weapon which you can use to change the world.””