In Memory of my Grandfather, Vasudev Jeewa Juta 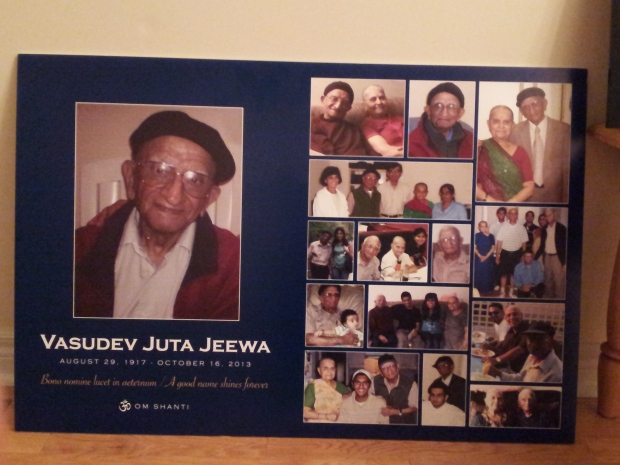 A photo collage put together for my grandpa. My dad can be seen in the photo in the first column, second row, on the left. Standing with him are my grandparents and two aunts, Geeta and Lily.

This is a celebration of my grandfather (fondly known as bapuji and nana in Gujarati) who passed away about three weeks ago. As many of you know, I find comfort and ease in expressing my thoughts and feelings through words. Both my grandpa and dad were brilliant writers, so it is no surprise that I too would enjoy writing, often found with a pen and notebook, scribbling down a passing thought or a reminder. This is a way for me to not only look back on the wonderful moments and memories I have of him, but to also share the person that he was with those who knew him well, as well as those who did not have the opportunity to meet him. I hope that I can capture the person he was through writing.

There is so much to say about my bapuji. I have always been so proud of my family history on my mom and dad’s side. My bapuji’s family lived in the town of Verlum, in Natal (now Kwa-Zulu Natal), South Africa where he was a jack of all trades, from being a jeweler with my great grandfather, to finding his passion for helping others through teaching English, drama, art and special education. He was very involved at his high school where he loved playing football (soccer) and cricket, organizing events and leading clubs and taking part in plays. 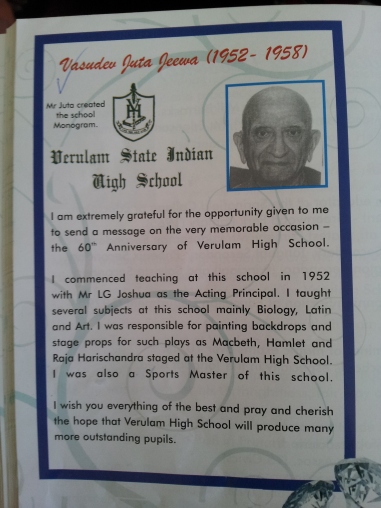 A message from my bapuji to his former high school for their 60th Anniversary.

He was also one to advocate for change and had a strong belief in human rights and equality. He was in his mid 20s when apartheid was implemented in South Africa and I fondly remember his stories of holding meetings and rallies in his town, where he and his friends and fellow advocates would express their disdain for the system of apartheid and advocate for equality. He also led anti-apartheid movements in Verlum as well as the city of Durban. Soon, however, he was blacklisted by the authorities for his efforts and with the help of one of his friends, had to leave the country immediately, bound for Canada. Arriving here in the midst of winter, he spent a year alone in Toronto where he found a job as a professor. My grandma and dad joined him a year later, as things were getting worse in South Africa with apartheid.

My grandparents lived with my family and I in Dundas until I was about 16 years old and over the years, my brother and I got to know him very well. He was a kind, compassionate individual with a BIG heart and so much love to share, whether it be through shared hugs and laughs and his compelling stories and conversations about world events. I have fond memories of birthdays, carving pumpkins at Halloween, watching Star Trek (my grandparents are HUGE Star Trek fans), my good friends (I’m thinking of you, Jenn, Jenny, Adriana, Misty and Tova!) coming over after school and my grandpa and grandma spending time with us. 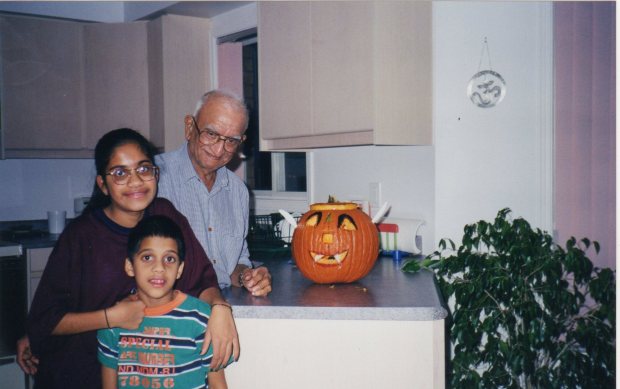 My bapuji and I bonded over English literature and he would share quotes from the likes of T.S. Eliot, Rabindranath Tagore, William Shakespeare and William Wordsworth and recite poems like one of his favourites, The Mountain and The Squirrel. He was naturally a creative person. He was not only a talented writer, but a talented artist. In fact, he is said to be the first Indian graduate in Fine Arts at the University of South Africa!  He loved drawing, painting and sketching. As I like to write, he loved to draw. When I was younger, I’d often pop by his and my grandma’s room to watch him at work. He’d show me how he’d use different pencils and the different oil and water color paints he had. He had a number of brilliant projects in the works, ideas that stemmed from his personal beliefs in equality and his world views. 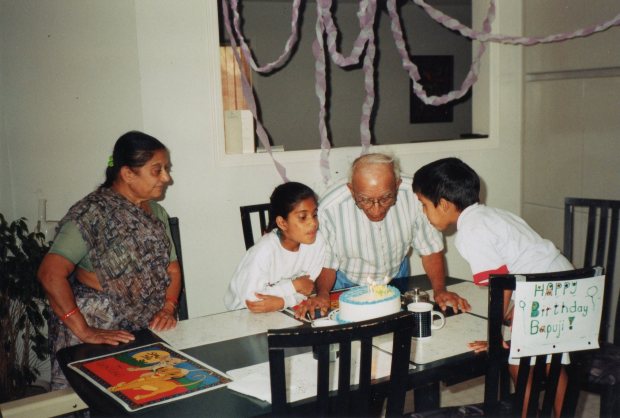 One thing which I have always admired about him is his desire to be a lifelong learner. He loved learning about different cultures, even taking up studies in Spanish which he loved to speak, and was more of a spiritual individual than a religious one, having a deep appreciation for all religions and a strong belief in the Mother Force. He also loved passing on facts, riddles, anything he learned with others, whether it be complete strangers on the street, to my cousins and family.  That’s the other thing, too, his ability to strike up a conversation. My dad, along with myself definitely take after my grandfather in this regard. My grandma was also a father figure to many of us and passed on words of wisdom.

My dad’s death hit my bapuji very hard. That, along with falling ill nearly two years ago during a trip to South Africa, took a toll. I remember seeing him a month or so after and  what amazed me was his sharp mind and awareness of what was going on in the world. 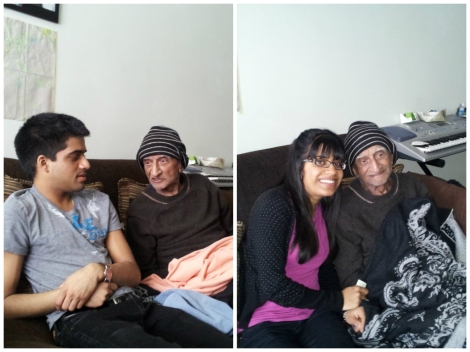 Visiting my grandfather in the winter

It’s hard realizing that I have lost both my father and grandfather, my father nearly seven years ago and my grandpa recently. I take solace in the fact that they are no longer suffering and are at peace. At 96 years old, my bapuji has left an incredible legacy behind for myself, my grandma, my brother, many of my Juta cousins, aunts, uncles and his a legend in the town of Verlum. He lived a life, one in which he accomplished so much, never taking anything for granted and living in the moment, living for the day. He loved with all his heart and admired my grandma; they were married for over 70 years and seeing them together was always a joy, even when they would playfully argue when each tried to get a word into the conversation.

I miss him dearly, his smile, laugh, charisma, our conversations, his jokes, his stories. So many remarkable stories, including how my ba (grandma) and bapuji had the opportunity to meet Mahatma Gandhi’s nephew (in South Africa) and Pierre Trudeau, and even had lunch with Persis Khambatta, the Indian actress who played Lieutenant Ilia in “Star Trek: The Motion Picture.” He has and will continue to inspire us all, to work hard and reach for the stars.

I leave you now with The Peace Prayer of Saint Francis of Assisi, one which my grandfather knew from memory and would often recite.

Sending my love and prayers to you, Bapuji.

O Divine Master,
Grant that I may not so much seek
To be consoled, as to console;
To be understood, as to understand;
To be loved as to love.